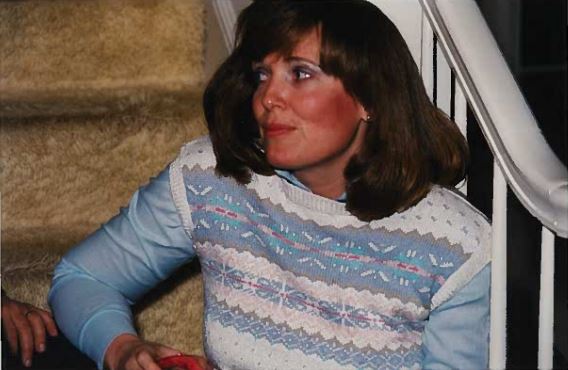 Vicki at an SOS gathering. 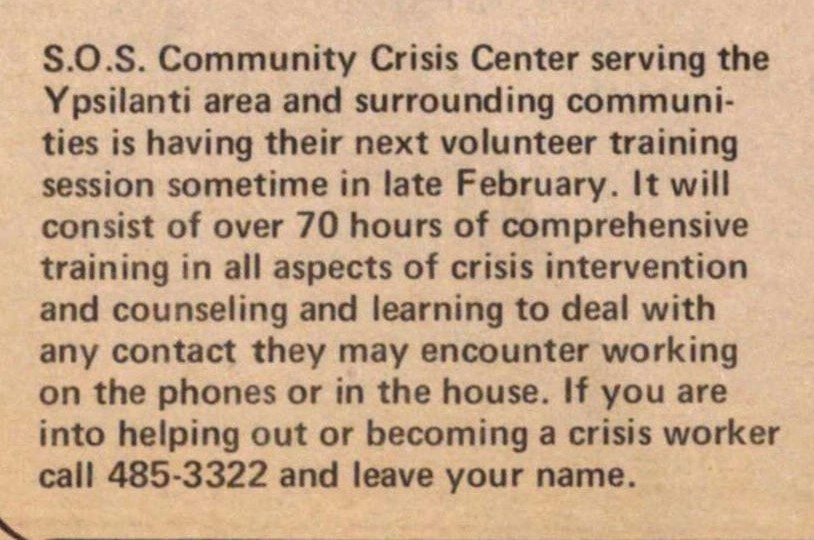 Ad from September 1973 issue of the Ann Arbor Sun.

Vicki Niebrugge came from a small town in Oakland County. When she arrived in Washtenaw County in the early 1970s, she wanted to volunteer at a new agency called SOS Crisis Center. She went to the very first volunteer training, but the icebreaker activity was really touchy-feely; she felt so uncomfortable she ended up leaving the training early.

Years later, Vicki kept hearing about all the great things SOS was doing. She wanted to give volunteering at SOS another try. (She was glad to see they were using a new icebreaker!) She completed the SOS training process and began to volunteer on the crisis line.

Throughout her time volunteering, she met Carole Wortley, who was the training coordinator during the 1980s. Vicki remembers how warm, caring, and encouraging Carole was. “We logged notes for every crisis call we answered. Carole would write notes of encouragement  on every entry for all the volunteers who worked on the crisis line. She would say things like, ‘You did a great job with this call.’ or ‘Sorry that call was rough!’ and offer advice for next time.” Vicki would volunteer at SOS from midnight until 8:00 AM on the crisis line and then go straight to her job. The crisis line got all types of calls from family conflict to suicide prevention.

The SOS crisis line during the 1970’s-1990’s was a lifeline for thousands of people. Many SOS volunteers started careers in mental health and social work by volunteering on SOS’s crisis line. By the year 2000, SOS’s crisis line moved to the Michigan Medicine suicide prevention line. Even though SOS does not run the crisis line anymore, Vicki says one thing hasn’t changed about SOS. What has remained the same is “the heart of the people to help others in need.”

Vicki has so many vivid memories of the calls she answered on SOS’s crisis line sitting in that little room. She said, “You never know who might call and why.” Once Vicki answered a crisis call from a couple. They were driving on the highway and planned to commit suicide together by crashing the car into the median. Vicki kept them on the phone so long, they finally exclaimed, “Well now the freeway has ended and there is no median left!” She was so relieved and glad to have derailed their plan.

Vicki remembered another person who called the crisis line frequently. Vicki and other volunteers had helped him on many occasions. She found out that years after SOS’s crisis line closed, the person passed away from suicide. We have no doubt that services offered to him from Vicki and other volunteers at SOS over the years really helped to lengthen his life. Over the years Vicki often did training for new volunteers, then she served as Vice President on SOS board of directors and then the Board President for 10 years. Thank you Vicki for your many years of service to SOS and the community and for the amazing difference you have made!