In the 1970s, I was a Biology/Chemistry major at Eastern Michigan University. I wasn’t a very touchy feely type of person. My path was to be a researcher in a lab or some kind of technical job. I transferred to EMU as a sophomore and didn’t have many friends. I found out one of my best friends in high school, Cindy, lived in the next dorm. I sat next to Cindy in band for three years in high school. I went to visit her but she was on her way out to see her boyfriend. While I was there I met her roommate Gail. She was very friendly and we connected easily. Gail was organizing and working with this group called SOS (Students Offering Support). 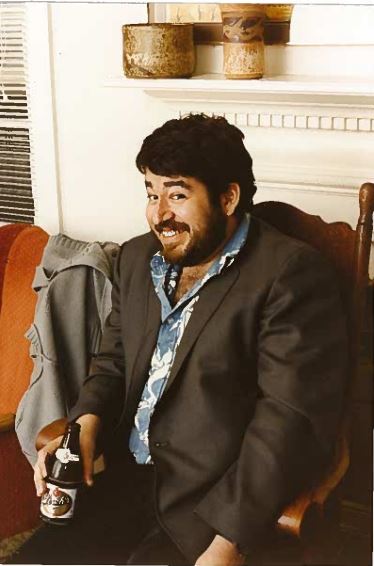 She said it was a crisis center that helped with suicide prevention and drug counseling. I had three of my closest friends commit suicide during the past two years and was intrigued. She was going off to a meeting and asked if I wanted to come along and meet some of the people. The meeting was great. The people were very warm and there were a lot of friendly girls. I must say, I was more interested in the social aspects of SOS rather than the helpful parts. It was refreshing to be around warm people who listened and connected with each other rather than the chemistry majors I usually hung out with.

The training at SOS was amazing and transforming. Every four months, there was a training session with 50 new recruits to man the 24 hour hotline. Each person had to go through at least 40 hours of training. We started out with “Empathy Weekend.” This was Friday night, Saturday and Sunday. You first broke into groups of 6-8 and talked about why you were there. Then came a session about feeling words. We had to generate words which expressed feelings. This was a challenge for a Biology/Chem geek. We then learned about how people help. Men want to solve the problem and women want to sympathize. This was really new stuff to me.

On Saturday we learned Active Listening based on the work of Carl Rogers. We would listen to someone roleplaying a situation. The whole group would then critique the scene. Each group would have a supervisor who led the discussion and would spot the trainees who were too needy or not a good fit. On Sunday we were exposed to more issues and how to respond. Then over the next couple of weeks, we would come in for topic training to help us understand other resources. For example we had first aid training, CPR, drug overdose training, housing issues, abuse training, depression and suicide and general how the system works training.

If you survived this training you then went into the volunteer corps, where you committed 16 hours every two weeks in four hour shifts. While you were new, a senior counselor would work with you. After each call you would debrief and continue your training. I usually took the midnight to 8 AM shifts because I worked. Often I could nap on the couch with the phone next to me.

Some nights I would listen all night to a depressed lonely person. I did the Tuesday midnight shift for about eight years. From this experience, I decided this was good and meaningful work and went to grad school to earn an MA in counseling. While I was at SOS I developed many close friendships I still have today. One of my closest friends Jeff, who was Gail’s boyfriend and eventually spouse (I photographed their wedding) later passed away from cancer. I’m still in contact with many of my SOS friends and hold them very dearly.

I spent over 18 years volunteering at SOS in many roles as a trainer head of the on-call team and on the board. I even rewrote the training manual as part of my Master’s Degree coursework. At one point, SOS’s federal funding ran out for a few months. I took a job as Washtenaw County’s drug educator and passed my wages along to keep funding going for SOS. SOS’s executive director got a paper route and used his wages to keep SOS going too. We kept it alive until federal funding started again. While I was still at SOS I became a social worker in Manchester and later a school counselor. It also affected the way I taught and my personal relationships. It’s funny how a chance meeting can change your life path.

-written by Mike Mouradian
In honor of SOS’s 50th anniversary in 2020, we are telling SOS’s story – by sharing the stories of people who have been impacted by SOS. We will share 50 stories of impact for the 50 years of SOS.